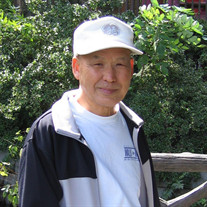 Yaoki Iijima was born August 31, 1932 on a rice farm in Japan to Naka and Isao Iijima, their eighth son. He grew up to the sound of Allied bombers overhead during WWII. All his brothers were drafted, but he was too young. He remembers offering rice at Shinto shrines and praying with his mother for the safe return of his brothers from war. It was not until after WWII and his high school graduation that Yaoki met a Christian missionary while studying English. Once he heard of Christ’s sacrifice for his sin, he readily accepted Jesus as his Lord and Savior. At that time he took the name Peter and traveled with missionaries as an interpreter for about three years before going to John Brown U. in Silome Springs, Arkansas to study electrical engineering. In 1961 he came to Portland, Oregon for a one year Bible course at Multnomah School of the Bible. He met Geneva Cobb at an area church, and they were married August 25, 1962. After his naturalization, Peter worked for Bonneville Power Administration for 32 years beginning in 1965. In 1969 BPA sent him and his family for a four year tour of duty in Japan. At the time BPA was buying millions of dollars worth of high voltage power equipment that needed to be tested before shipment. During those years, his Japanese family enjoyed many visits with him, Geneva and the children. In 1976 the family moved to Oregon City, and about 1988 they joined Oregon City Evangelical Church, where he was active until recently. On September 7 he succumbed to pneumonia and other complications. He is survived by his daughters, Robin Clement of Aloha and Crystal Kfir of Jerusalem, Israel; his sons, Stephen Iijima of Tokyo, Japan and Timothy Iijima of Alexandria, Virginia. Grandchildren are: Jonathan Rohr, Grace Iijima, Sofia Iijima, John Iijima, Leo Iijima, Antonio Iijima, Itay Kfir and Liron Kfir. In lieu of flowers, the family asks that memorial contributions be made to the Oregon City Evangelical Church for Peter Iijima's favorite missionary to Israel.

Yaoki Iijima was born August 31, 1932 on a rice farm in Japan to Naka and Isao Iijima, their eighth son. He grew up to the sound of Allied bombers overhead during WWII. All his brothers were drafted, but he was too young. He remembers offering... View Obituary & Service Information

The family of Yaoki Peter Iijima created this Life Tributes page to make it easy to share your memories.

Send flowers to the Iijima family.