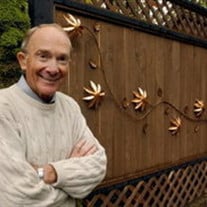 Charles A. (“Chuck”) Clemans, educator, community activist, supporter of the arts, fisherman, ‘killer skier,” race car driver, and steadfast and loving husband, father and grandfather, died Dec. 22, 2011, at the age of 77. He was the eldest of the four children of Charles B. and Florence Clemans of Camas, Washington. His higher education began with Clark College, where he helped design the Chime Tower that stands on the campus today. He earned a Bachelor’s degree at PSU, where he was a member of the first graduating class, then a Master’s degree from Oregon State and a doctorate from Nova University. His career as an educator began in the elementary classrooms in Portland, interrupted by two years in the Army in the late 1950’s. He served the Portland School District in a variety of capacities during the 1960’s and 1970’s, ultimately as the District’s Director of Governmental Affairs and its lobbyist in Washington D.C. and Salem. From 1980-1990, he served as Superintendent of the Oregon City School District. Despite the demands of his professional life, Chuck pursued a multitude of interests, including boating and fishing, dirt bike riding and skiing with his sons Glen and Dean. He traveled across the Northwest on long weekends to participate in auto racing, and in 1970 and 1971 served as President of the International Conference of Sports Car Clubs, which organizes amateur auto racing in Oregon, Washington, and British Columbia. Chuck served as president of both the local Rotary Club and Chamber of Commerce, and headed the Regional Arts & Culture Commission, as well as many Clackamas County arts organizations. He supported local artists directly, also, by featuring their works in an outdoor sculpture garden on the two acres of Oregon City property where he and his wife Nancy Hungerford spent all of their 24 years of marriage. They were married at Timberline Lodge and returned there every year for their anniversary. Chuck was a board member of the Friends of Timberline and was instrumental in the efforts to renovate the amphitheatre at Timberline. He was a self-taught gourmet cook who loved entertaining and cooking for others. Chuck became even more active in the community after retirement. He was elected three times to represent the Oregon City area on the Clackamas Community College Board of Directors, most recently last May, and served even longer on the College Foundation Board of Directors. He led fund-raising campaigns to equip and establish an endowment for a new performing arts center at CCC. Chuck served two terms as president of the Oregon Community College Association, and lobbied Oregon legislators for many years on behalf of community colleges. Whether on a bicycle or on his beloved 30’ powerboat, the “Pioneer Spirit,” or on the ski slopes, Chuck enjoyed an active and joyous life, even though he lived with a long-standing heart condition. He made a miraculous recovery from cardiac arrest and brain surgery in early July, 2011, and after 10 weeks in the hospital returned home and resumed his community activities and his good times with his wife, children and grandchildren, and many friends. His death, on the curving roads south of Oregon City behind the wheel of his BMW, was a tragic end to everyone’s hopes for his full recovery. Chuck is survived by his wife, Nancy of Oregon City; his sister, Lois Buhman of Newton, Wash.; brothers, Bill of Lake Stevens, Wash. and Lloyd of Battle Ground, Wash.; sons Glen of Sherwood and Dean of Gresham; and three grandchildren, Brandon Clemans of Oregon City, Brittany Clemans of Portland, and Tabitha Lambert of Medford. Chuck left a legacy of caring for the communities of Oregon City and Clackamas County, and for education at all levels in Oregon. He was a gifted mentor, mediator, organizer and leader, a gentle and good man who lived his 77 years to the fullest. Those of us who knew him and loved him are forever enriched by that experience, and are motivated to “Be More Like Chuck.” A celebration of Chuck’s life will be held at the Oregon City campus of Clackamas Community College, in the Randall Hall gymnasium, on Saturday, Jan. 7 at 2 p.m., followed by a reception. In lieu of flowers, the family suggests contributions in Chuck’s memory to the Clackamas Community College Foundation PDF Printable Version

The family of Charles A. Clemans created this Life Tributes page to make it easy to share your memories.

Send flowers to the Clemans family.