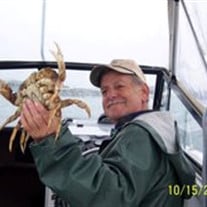 Obituary Clyde Ernest Brown, 68 years of age Resided in his hometown of Oregon City Clyde lost his hard fought three and half year battle with ALS at 12:45 AM on Tuesday, October 19th, 2010 at home with family present. Clyde was born February 8th in the year 1942 to (Roy) Lawrence and (Alice) Berdina Brown. He lived in and attended school in Oregon City until the end of his 12th grade year. He then joined the army and served his country from August 1960 to August 1963. During his service, he married his first wife Charlene Cook in 1961. Clyde and Charlene had three children, Christy, Cynthia, and Clyde Allen. After Clyde got out of the service, he began his lifelong career as an auto body painter at Freightliner in Portland, Oregon. Clyde then married his second wife, Tamula Nelson, and had two children, Candice and James. Clyde joined Alcoholic's Anonymous and took his last drink of alcohol in 1994 with the help of his now longtime friend and Sponsor, J.J. (Jim Jennings). With many years of sobriety under his belt, Clyde purchased a brand new Bayliner boat and courageously moved by himself to Newport, Oregon. He fulfilled his lifelong dream of living at the coast and fishing. He worked the last ten years of his career at Power Ford in Newport, and retired in 2005. Clyde soon embedded himself in the community and quickly made a name for himself. He was well known in the Newport/Waldport communities and made friends everywhere he went. A friendly and funny man by nature, he was embraced by the fishing community, and soon became a skilled captain that rarely came back to port without his limit in both fish and crab. His friends and family spent many days on his boat with him, and have many fun stories to tell of their adventures. Clyde also spent much of his time helping others through Alcoholic's Anonymous, mentoring and sponsoring newcomers to the program, and working in the prison system speaking to inmates dealing with addiction. While living in Newport, Clyde’s daughter, Christy, and soon to be step-daughter Becky, re-acquainted him with someone whom he had known in high school; Kathleen Nichols Cook. After a short courtship, Clyde and Kathy got married on August 5, 2000. They lived happily at the Oregon Coast, and then migrated inland to own several acres in Toledo. After his diagnosis Clyde was able to cross off several things on his bucket list. He and Kathy went on an Alaskan road trip, then on a road trip around the United States. Then with different family members he saw the Mayan Ruins in Mexico, Pearl Harbor in Hawaii, and last but not least an Alaskan Cruise where all of his immediate family plus a few extras joined him in June 2010 for what has become a treasured memory. The family will be forever grateful to Kathy for her loving care and devotion that allowed him to remain in his own home during his fight with ALS. Clyde was preceded in death by his daughter Cynthia Marie, his parents and his two little sisters Dorothy and Susan. Clyde is survived by his wife Kathy, and his children Christy Bray 49 and her husband Nigel, Clyde Allen 45 and his wife Edna, Candice Donovan 39 and her husband Adam, and James Brown 37 and his wife Diana, and his step-children Becky McEahern and her husband Bill and Ralph Cook III and his wife Pauline. He is survived by his brothers and sisters Larry Brown (Ruth), Patricia Nordstrom (Jerry), Hugh Brown (Yong OK), Bruce Brown (Marie) and Bonnie Clement (Steve). He is also survived by 14 grandchildren and four great-grandchildren, and many cousins, nephews, nieces, and great friends. Clyde, Dad, Papa….you are in our hearts and will be missed so much. We will love you forever and always! The funeral will be held at his congregation: Church of Jesus Christ of the Latter Day Saints 15344 Henrici Rd., Oregon City OR 97045 Viewing is from 10:00am – 10:35am, service at 11:00am with reception following. We will then proceed to Mountainview Cemetery where he will be buried with military honors. If you would like to make a donation to the ALS Association in Clyde’s honor please go to http://webor.alsa.org/site/PageServer?pagename=OR_homepage PDF Printable Version

Obituary Clyde Ernest Brown, 68 years of age Resided in his hometown of Oregon City Clyde lost his hard fought three and half year battle with ALS at 12:45 AM on Tuesday, October 19th, 2010 at home with family present. Clyde was born... View Obituary & Service Information

The family of Clyde Ernest Brown created this Life Tributes page to make it easy to share your memories.

Clyde Ernest Brown, 68 years of age
Resided in his...

Send flowers to the Brown family.