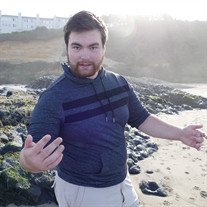 Colin Philip Jackson, 21, of West Linn, Oregon passed away unexpectedly on Wednesday, Oct 31, 2018. Colin was born in Akron, Ohio, on June 8, 1997, to Thomas and Kelly Jackson. Colin was a 2015 graduate of West Linn High School and attended both Oregon State University and Portland State University. Inspired to pursue medicine following the death of his cousin, Isaac Sponseller, Colin dreamed of becoming a pediatric oncologist. Colin was previously employed by United Parcel Service. Colin’s life was shaped by his love of science, enjoyed learning new things and putting myths to the test. He truly was an out of the box thinker, with a wit and an intelligence that was both unique and inspiring. As the oldest of four, as a child Coin often led the way in games of imagination, creating complex books of dinosaurs, Godzilla and even storyboards of their favorite television shows. He was detailed in a way that left an impression. His kindness and gentle nature served him well, allowing him to be loved and to love so many. He was known for his wicked impersonations and his creativity was outstanding. Colin enjoyed watching movies and TV series with his whole family, resulting in what we like to call movie speak. Those who knew us well knew we liked to speak in movie quotes. He was simply a remarkable human being, with a capacity to love, laugh and bring light to others. He is survived by his parents, Tom and Kelly (nee Sponseller), of West Linn, siblings Airman Riley Jackson of Minot Air Force Base, Garrett, and Keegan Jackson, both of West Linn; grandparents, Carolyn Snode of Alliance, Ohio, Ralph and Kathy Sponseller of La Grange, KY, Patricia Jackson, of Alliance, Ohio, Mary Ann Jackson, of Massillon, Ohio, numerous aunts and uncles, and cousins, and his beloved girlfriend, Kaitlyn Compton, and her family, Terry, Cathy and Nick, all of West Linn. He was preceded in death by his grandfather, Samuel Joseph Jackson of Massillon, Ohio, uncle Ray Sponseller, of Alliance, Ohio, and Isaac Sponseller, of Umea, Sweden. A celebration of his life will take place Friday, Nov. 9, from noon to 2pm, at Hillside Chapel, 1306 Seventh St., Oregon City, OR, 97045. In honor of both Colin and Isaac, the family requests donations can be made to Doernbecher Children’s Hospital Foundation, OHSU, to help continue to fight against childhood cancer.

The family of Colin Philip Jackson created this Life Tributes page to make it easy to share your memories.