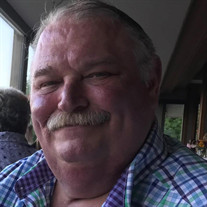 It is with deep sorrow our family mourns the passing of Dennis Roy Rhodes who left for heaven peacefully in his sleep at home on Thanksgiving evening. Our beloved father, grandfather, brother, uncle and deeply loved husband, Dennis “Big D” as he liked to be called, was 64 years old. Much of his family was by his side all day for this last holiday with him. Although we are in great sadness, we are also thankful he is no longer battling daily debilitating pain. Dennis said how happy he was to have his family all together. Dennis was so proud to be a native Oregonian and was born in Oregon City, Oregon to LaDonna Ostrander Rhodes and his father, Carl M. Rhodes. Dennis was the oldest son of six brothers and sisters, who loved him dearly and will miss him every day he is gone. He was baptized in the Nazarene church and had his own special relationship with our Lord. As a young teenager, he always provided for his younger siblings, and continued to always provide well for his family and children. Dennis devotedly adored his wife, and was a remarkable man of respect, honor and integrity who loved hunting and fishing, was very charming, kind, and generous, a great sense of humor and never accepted anything less than perfect when creating and building projects. We also remember just how ornery and stubborn he could be but no matter what Dennis cherished spending time with his wife, family, and grandchildren whenever he could. In 1997, he landed on a doorstep in Cherry Grove, Oregon, where he met the love of his life and soulmate, Robin Elaine. When Dennis met Robin, they discovered they shared the same September 25th birthday. They married in 1998 and blended a new family of his two sons and three daughters, and her three sons. Some memorable memories include “ham gravy’, driving his new family to California for Christmas with 8 people all together in a little tiny Ford Ranger. He was ecstatic to find his real father in 1999 whom he had never met, took his wife with him for a year on the truck seeing the United States, and then an RV to camp/fish with his family. Every day, he made funny jokes and sat on his deck for the sunrise to “see what the day would bring.” Lastly, he designed a beautiful remodel of his home in LaCenter, Washington this past summer to keep his wife in style while he waits for her to join him. He definitely leaves an unforgettable mark on our world. Dennis was a master of trades building a home from the ground up and taking care of a farm with his Uncle Woody and Aunt Darlene. He went on to be a mechanic at Reedville Garage, blasted underground tanks, was an iron worker with a local union and helped work on the Jacksonville Memorial Bridge over the Columbia River. After being injured on the job, he attended Portland and Clackamas Community Colleges where he completed his education in hydraulics, refrigeration, and computer network systems. From there, he became half owner of Precision Computers in Portland, Oregon where he worked long hours growing the business. Later he started a mobile computer company, Westside Computers, servicing hardware and software commercial business computers with accounts at several Century 21 Real estate offices and the North Plains City Hall. He was in the realm when he went to work for the Federal Fish and Wildlife Help Desk, and then his dream job driving as a long-haul truck driver 20+ years. Still wanting to drive and not able to continue truck driving, he became a much loved and respected bus driver for the K-12 children of the LaCenter Schools where he lived. Dennis is survived by his loving wife, Robin; sons, Joshua, Zachary, Justin, Jacob and John, and daughters, Becca, Melody and Stephanie; sisters and brothers, Carla Jo (Rod) Hathaway, Timmy (Kim) Wynne, Lawana Wynne, Tammy Roley (Steve), Mark Wynne; eight grandchildren; Aunt Barbara (Bob) Puckett; Uncle Stephen Rhodes in California, Cousin Michael Ostrander; many other cousins, nephews, nieces and his extended Roggi family. He was predeceased by his mother LaDonna Ostrander, father Carl Rhodes, Aunt Darlene, and Uncle Woody Foy Woodward. Dennis’s wife Robin Rhodes extends a very special thank you to the staff at Kaiser Permanente and Legacy Hospital, who always took excellent care of him for many years as well as Community Hope and Hospice for their care and compassion in his last days. Dennis is finally resting peacefully, and we hold him lovingly close in our hearts, minds and spirit within us. Celebration of his life will be held on Saturday, December 11, 2021, at 4:00pm. Donations can be made in his memory to St. Jude Hospital.

It is with deep sorrow our family mourns the passing of Dennis Roy Rhodes who left for heaven peacefully in his sleep at home on Thanksgiving evening. Our beloved father, grandfather, brother, uncle and deeply loved husband, Dennis &#8220;Big... View Obituary & Service Information

The family of Dennis Roy Rhodes created this Life Tributes page to make it easy to share your memories.

It is with deep sorrow our family mourns the passing of Dennis...

Send flowers to the Rhodes family.