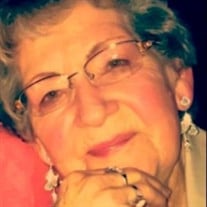 Doris Anderson Oct. 18, 1930 - Aug. 25, 2020 Doris Anderson, 89, passed away peacefully Tuesday, Aug. 25, 2020, in her home in Oregon City. Doris was born in Auburn, Mass., to Roy and Ruth Thomas, along with two sisters and three brothers. In 1950 she married Warren Anderson. The two moved to Oregon in 1970 and established A & A Drilling Service in Clackamas. Later in retirement Warren and Doris found a second home in Mesa, Ariz. in the winter. Doris was a devout parishioner of St. Paul's Episcopal Church in Oregon City and a member of TOPS, at both of which she had many friends. When not entertaining or caring for grandchildren she enjoyed decorative ceramics, a pleasant walk, and collecting photographs. Above all Doris loved family, friends, neighbors, and anyone who was good company. She was at her best when surrounded by those she cared about, and there were many. Her soft and diminutive demeanor hid within it a stoic and grand presence in the world around her. When she spoke a gentle word its power was unmistakable. To have her in your life was to have an immovable presence of kindness and love and a touchstone of what is right and true in all of us. She was preceded in death by her husband of 64 years, Warren. Though he passed away before her, he was always in her heart and in her thoughts. Now, by the grace of God, they are together again. She is survived by her sons, Warren Anderson Jr. and Brian Anderson; daughter, Robin Anderson Tigli; grandchildren, Brandon, Sean, Trevor, Justin, and Arin; and great-grandson, Colton. In lieu of flowers, the family requests that donations in memory of Doris be made to: Kaiser Foundation Hospitals, c/o Institutional & Planned Giving – Hospice Care, 1950 Franklin Street, 4th Floor, Oakland, CA 94612.

The family of Doris Eleanor Anderson created this Life Tributes page to make it easy to share your memories.