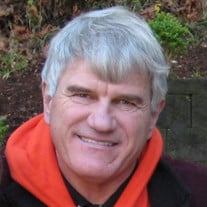 Family was keeping a continuous presence at Emery’s bedside at OHSU when he passed early Saturday morning, July 22, 2017. He was the first child born to Emery & Shirley Smith on August 2, 1947 in Oregon City – less than two miles from the homestead house his Oregon Trail ancestors built. He lived his youth and school years at the family berry farm in Beavercreek, Oregon where three more children grew the family size to six. At age six he began working summers on the farm picking berries, and at thirteen advanced to the better pay and longer hours in the hay fields. This sound work ethic established early on stayed with him his entire life – work hard, keep moving forward, and help one another. He enjoyed the challenge and team work in sports and excelled in both football and wrestling. After graduating from Oregon City High School in 1966 he joined the US Navy and would spend most of the next four years afloat in the Pacific as a Quartermaster. His last ship was the USS Providence. He was married to Sue Cole from 1971 to 1994. Following his service he began a long career in home building in the Portland area, first as a framer and advancing over the years to own and operate his own construction firm, Encore Homes. In 1995 he married Cathy Radcliffe. Emery enjoyed sampling many interests, including cars, surfing, speed boats, flying, sailing, camping, travel, and cycling; however, the primary focus in his life that never waned was his love of family and friends. Several of those he worked with became his closest friends. His only child, Scott, was his best friend. Scott, with his own family, lived close by and the two of them could be seen together almost daily. His other daily companion was his dog, who would undoubtedly be by his side at job sites, meetings, and family events. Many friends and family benefitted from his construction experience, ending up with a porch, fence, or deck for perhaps the cost of materials or free. Emery was one of the main organizers for the summer and winter family reunions, which often drew 80-100 family members, and he spoke fondly of his recent 50th high school reunion which he had also helped arrange. Emery enjoyed his work and had no plans yet of retiring from his business as he approached his 70th birthday. He was very healthy and active until he fell from a ladder at home on July 4th. The head injury he sustained resulted in his death eighteen days later. Emery would have greatly appreciated the professional and caring attention he received from the medical staff at OHSU; the multitudes of visitors, both family and friends, observed it every day. He had been a resident in the Milwaukie/Gladstone area most of his adult life. Emery was preceded in death by his mother, father, and sister Wendy. He leaves behind his wife of 22 years Cathy, brother Jerry (Sue), sister Suzy, son Scott (Erica), three grandchildren (BayLee, and twins Isaac, & Sadie), and four step-grandchildren (Luke, Grace, Morgan, and Elizabeth). He was a member of the Athey Creek Christian Fellowship. In lieu of flowers please consider making a donation to the Oregon Humane Society, https://www.oregonhumane.org Services will be held at the Athey Creek Christian Fellowship in West Linn, Oregon on August 8th at 11am. Internment will follow at Willamette National Cemetery where his mother and father also rest.

Family was keeping a continuous presence at Emery&#8217;s bedside at OHSU when he passed early Saturday morning, July 22, 2017. He was the first child born to Emery & Shirley Smith on August 2, 1947 in Oregon City &#8211; less than two miles... View Obituary & Service Information

The family of Emery Charles Smith Jr. created this Life Tributes page to make it easy to share your memories.

Family was keeping a continuous presence at Emery’s bedside at...