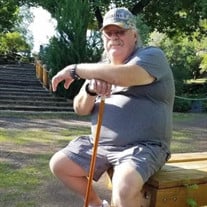 Jerry Davis followed his Savior home, August 28th, 2021, sitting in his sports car from his driveway in Gladstone Oregon. While his family wasn’t ready for him to leave, they have great faith that he is safe in the arms of Jesus. Born on May 31, 1950, to Margaret and Lloyd “Chips” Davis, in Brookings, South Dakota. Jerry was their first-born and was a handsome baby boy. Jerry had a great sense of service to his community starting with time as a Boy Scout. He and his brother had a lot of fun when they spent time on Grandpa Bob's farm. Hanging out in the hay loft, hunting for anything to shoot in the wind-row and baling hay. Jerry graduated from Walla Walla High school. In high school he was an active participated in a drama and speech competitions. He won several times won 1st place for his speaking skills. After graduating high school, he joined the United States Marine Corp in 1968 and served in the Vietnam War. While in service he fought valiantly and saved many of his comrade’s lives. His actions and leadership earned him 1 Silver Stars, 3 Purple Hearts, and the Navy Achievement Medal with “Combat “V””. Sargent Davis was honorably discharged from service in August of 1970 but choose to continue to protect his community by graduating top of his class at the Washington State Police Academy. He served as an officer in College Place Washington. Then moved to the Sheriff's Office until he moved to Portland Oregon and worked as a hearings officer. Jerry met Mary in Portland at a church function for people without spouses. Getting married in the summer of 1990, they blended their family making them 9 in total. Their home in Gladstone has been the center family gatherings filled with laughter and love. Jerry and Mary just celebrated 31 years of marriage. Jerry was an outdoors man and enjoyed hiking, skiing, fishing, and hunting; but his greatest love and passion was music and song writing. Starting young he worked on his grandparent’s farm saving every penny one summer to buy his first guitar. This started his lifelong love of music and songwriting. He played many instruments and, in several bands, but is best known for his 28-year musical ministry and Christian folk band, Have Gospel-Will Travel. Recording 6 CDs in all and traveling the around the Pacific Northwest sharing his original songs to 1,000s of people young and old. He regularly played during services at his church Christ the Vine Lutheran, at Tuesday Treasures, and Journey Gathering Baptist Church. Pre-deceased by sisters Mary “Nikki” and Jane. Jerry is survived by his spouse Mary; Parents Lloyd “Chips” and Margaret; Siblings Bob (Gini) and Liz (Gary); Children Tami “TJ” (Tony), Jamie (Shea), and Jackson (Lana); Stepchildren: Kim (Linda), Craig, Doug (Kelly), and Cindy (Jerry); 13 grandchildren, and 13 great-grandchildren. Interment will be at Willamette National Cemetery. All are invited to the service at Christ the Vine on October 2nd at 11 o’clock with luncheon to follow. In lieu of flowers please send donations to Christian Leprosy or Christ the Vine Lutheran in Jerry’s name.

Jerry Davis followed his Savior home, August 28th, 2021, sitting in his sports car from his driveway in Gladstone Oregon. While his family wasn&#8217;t ready for him to leave, they have great faith that he is safe in the arms of Jesus. Born... View Obituary & Service Information

The family of Jerry Michael Davis created this Life Tributes page to make it easy to share your memories.

Send flowers to the Davis family.