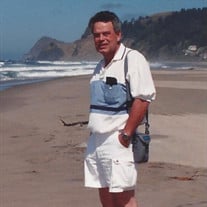 Lowell Clark Smith, Jr. went to Heaven to sing with the choir of angels on May 24, 2022. He was born June 19, 1938 in Oregon City, OR. His parents were Lowell Clark Smith, Sr. and Jane Elizabeth Larson. He was the eldest of four children. He graduated from Oregon City High School in 1956. He worked as a manufacturing engineer at OECO Corporation in Portland, OR, and retired after 47 years. Clark also served in the National Guard Reserves for 17 years. Soon after graduation, he married his high school sweetheart, Gretchen Marie Hopp. They made their home in Milwaukie, where they raised their two girls, Monica and Rebecca. Dad had an amazing gift of music. He had such a beautiful voice. He sang at both of his daughter’s weddings, and countless weddings and funerals of other family members and friends. He was a member of several choirs, including the Lutheran Choral Association, Bravo Vancouver, and the Zion Lutheran Church choir. You could always pick his voice out of the crowd. If Dad wasn’t singing, you’d find him working in his yard, tending to his 150 rose bushes which he proudly entered in many of the rose shows around the Portland/Vancouver area. He loved to fish on the Metolius River or at his family’s cabin on Devil’s Lake in Lincoln City, OR. Dad was an avid Portland Trailblazers fan and held season tickets for 30 years. After he retired, he picked up the game of golf and soon that occupied his days. He and his bride loved to vacation in Kauai and Black Butte Ranch. And as frugal as he was, he’d never pass up a trip to the casino. Clark is survived by his wife Gretchen of 64 years; his daughters Monica (Brent) Hample and Rebecca (Edward) Garrow; his siblings, David (Carol) Smith, Daryl (Sally) Smith and Kathy (Gary) Bruner; and his grandchildren, David, Rachel and Deborah Hample, Zachary, Sarah, Emma and Claire Garrow. In lieu of flowers, donations can be made to OHSU Dornbecher’s Children's Hospital, OHSU Foundation, P.O. Box 29017, Portland, OR 97296

Lowell Clark Smith, Jr. went to Heaven to sing with the choir of angels on May 24, 2022. He was born June 19, 1938 in Oregon City, OR. His parents were Lowell Clark Smith, Sr. and Jane Elizabeth Larson. He was the eldest of four children.... View Obituary & Service Information

The family of Lowell C Smith Jr created this Life Tributes page to make it easy to share your memories.

Lowell Clark Smith, Jr. went to Heaven to sing with the choir...