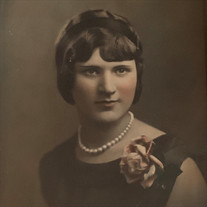 Margaret Emma Smith, 108, passed away peacefully and in comfort on November 23, 2018, in Sherwood Oregon. Margaret was born in Portland Oregon on January 26, 1910, to parents Ludwig Giezek of Poland, and Emma Herrmann of Germany, who immigrated to the United States in 1902-1903 through Ellis Island, and had one sister, Sylvia born in 1911. She graduated from Lincoln High School (now the PSU campus) in 1928 and obtained her teaching degree at the Oregon Normal School (now the Western Oregon University campus) in 1930. She taught all 8 grades at the Brush Creek School in Silverton, Oregon, followed by Carver School up until 1945. In 1936, she married Charles J. Smith and they built a home on land given to them by her parents in Carver, Oregon. They had three daughters, Charlene Jeanne born in 1940, Kathleen LaVerne born in 1941, and Margaret Ann (Margie), born in 1946. Margaret is survived by her daughter Kathleen, her best friend Donna Johnson and 38 of her 10 grandchildren, 23 great grandchildren and 6 great-greats. At age 57 she survived her husband, at age 76, she survived her youngest daughter, Margie, and at age 94 her sister Sylvia. Then at age 103 she survived her grandson, Henry, followed by her eldest daughter, Charlene at 104. Throughout these losses she maintained an incredible strength and graceful acceptance that “sometimes these sad things happen and we don’t know why – and sometimes it’s not for us to ask why.” Having been a teacher, she had a passion for the written word, language and spelling and was spelling up a storm right up until the days preceding her passing. She also had a love of penmanship and cursive writing – preferring to use a fountain pen when possible and had the most beautiful handwriting accented with flourishes and swirls. She attributes her long life to a healthy lifestyle and good nutrition, and practicing moderation in all things. She took great pride in the way she kept herself and home put together and understood the value in earning what she had and investing into the relationships of the treasured people in her life. She leaves behind memories and a legacy of true human grandness and grace.

Margaret Emma Smith, 108, passed away peacefully and in comfort on November 23, 2018, in Sherwood Oregon. Margaret was born in Portland Oregon on January 26, 1910, to parents Ludwig Giezek of Poland, and Emma Herrmann of Germany, who immigrated... View Obituary & Service Information

The family of Margaret Emma Smith created this Life Tributes page to make it easy to share your memories.

Margaret Emma Smith, 108, passed away peacefully and in comfort...