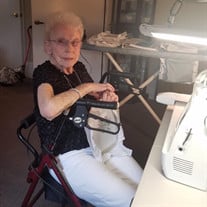 Phyllis passed away quietly on Easter Sunday, April 4, 2021 of natural causes. She was born in Carrington, North Dakota on Jan 9, 1922 to Arthur and Margaret Leifson. She joined a brother, Lloyd, who was two years older. When she was five years old the family moved to Silver Lake, Wisconsin to homestead. Then the family moved to the Grand Coulee Dam area where her father obtained work. When she was thirteen her father was killed at the dam, and her mother and brother relocated back to Carrington, North Dakota. Phyllis attended school there and graduated from Carrington High School. She met her future husband, Alfred (Al) Hanson and they were married on Jan. 10, 1940; the day after she turned 18. The marriage lasted for 64 years when Al passed away in Gladstone. From this union a daughter, Carolyn Lee, was born on December 15, 1940 during a blizzard. In August 1941, the family moved to Portland, Oregon to live closer to Al’s parents and to obtain more stable work for Al. During the war both Phyllis and Al worked at the Oregon Shipyards. Al as leadman and Phyllis a production welder overhead in the high bulk area of the ships. After the war was over, she worked at the Social Security Administration for two years, and then as a homemaker. During this time, she also did alterations for several ladies’ dress shops in the Oregon City area. It was at this time when the family moved to Gladstone. In 1950, Phyllis was hired as a credit manager for Montgomery Wards in Oregon City. After a few months she was promoted to Manager of the store. A position she held until health issues forced her to retire in the early seventies. During her career at Wards, she was promoted to their training program where she trained employees and opened new stores in Lebanon, Forest Grove, Beaverton and the Oregon City Shopping Center. After the new store in the Oregon City Shopping Center opened, she managed this store and the outlet store in downtown Oregon City. She often supervised twenty employees. Phyllis and Al belonged to several Masonic organizations. Phyllis was Worthy Matron of Pioneer Order of Eastern Star in Oregon City. It was at the the end of her term of Matron, that the Grand Chapter of Eastern Star in Oregon asked her to be the chairman for the state-wide cancer research fundraiser. At the conclusion of the two years that funds were raised, Phyllis presented a check to Dr. Fletcher, of OHSU cancer research in the amount of approximately $200,000. One of Phyllis and Al’s joys was their grandchildren Gary and Larry, who they enjoyed spoiling and spending a lot of quality time. The time spent with Grandma and Grandpa is a fond memory of the boys. One of Phyllis’s main enjoyment from the time she was a teenage was sewing and making her own clothes. From the time she was married with a family she made all the family’s clothes and was designing her own patterns for her, Carolyn and the grandchildren and quilting. In the later years she discovered machine embroidery, designing various embroidered patterns to be put on clothing, etc. Machine embroidered squares and putting them together in quilts was her passion. She quilted her last quilt when she was 97 and then she broke her arm. Al and Phyllis moved to Gladstone in about 1946 and lived there until 1957 when they moved to West Linn. They moved back to Gladstone in 1968 living there until Al passed in 2004. Phyllis lived there until 2006 when she moved to Vineyard Retirement living there until 2016. After another broken hip she moved to Deerfield Assisted Living until December 2018 when she broke her arm. This forced a move to Meadowlark Adult Foster Care in Milwaukie until her passing. Phyllis was preceded in death by her parents and brother, Lloyd. Her husband Al Hanson of 64 years in 2004; her son-in-law Wayne Hauck in 2018; and her grandson, Gary Hauck in 2020. She is survived by her daughter, Carolyn Hauck, and grandson Larry Hauck (Shannon). The family would like to thank her care provider Elena Mihalut, at Meadowlark Assisted Living Adult Foster Care for the excellent and loving care Phyllis received during her stay there. Elena and her staff were a blessing to Phyllis and her family. The service for Phyllis will be held on Tuesday, April 13th at 1:30 p.m. at Hillside Chapel, 1306 7th Street, Oregon City. Any donations in Phyllis’ name should be to the Sew and Sew of St. Stephens Lutheran Church. The funds would be used to buy material for quilts, lap robes which are given to nursing homes, homebound and are sent all over the world for the ELCA World Relief.

Phyllis passed away quietly on Easter Sunday, April 4, 2021 of natural causes. She was born in Carrington, North Dakota on Jan 9, 1922 to Arthur and Margaret Leifson. She joined a brother, Lloyd, who was two years older. When she was five years... View Obituary & Service Information

The family of Phyllis Caroline Hanson created this Life Tributes page to make it easy to share your memories.

Send flowers to the Hanson family.