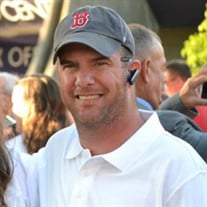 Sean Arnold passed away on Saturday, December 18, 2021 at the age of 52 from a sudden heart attack in his home. He is survived by his loving children, Erik & Emma; devoted wife, Tami; parents, Danny & Cindy Arnold; siblings, Becca, James & Geoff; nieces, Ashley, Kate & Sophie; and many other family members who will remember him dearly. Sean was born with a heart defect, which he never let stop him from doing anything. He grew up in Klamath Falls in the 80’s. He later moved to Southern California where he spent his early 20’s. When he moved to Salem, Massachusetts, just south of Boston he fell in love with the East Coast. He would later move back to Oregon where he met the love of his life and his future children. He jumped into their ready-made family and never looked back. There together, in Oregon City with his wife, Tami, they built their family and his business, Oregon City Computers. Undoubtedly, the happiest day of Sean’s life was the day he adopted his children, Erik & Emma. In his younger years he enjoyed playing hockey, as he was forever a Boston Bruins fan. He loved to spend time with his family and friends, whether it was a quiet evening watching TV and snuggling his cats, meeting a buddy for a cider, or attending many live concerts. He loved loud music, cherry ice cream, queso, tattoos and the Red Sox. Some of his best memories were made camping with his family, where he’d spend hours with a book or stoking the campfire. He never knew a stranger and would always make you feel welcomed. He loved to laugh and always enjoyed a good joke. Anyone that truly knew him, knew he had such a big heart and would do anything he could to help. He was giving of his time and resources. He showed up when it mattered, had your back, gave to those in need, and would defend and stand up for his loved ones should the need for it arise. His kindness and giving will leave an unwavering legacy in this community. He will live forever in the hearts of his family and friends. He lived and loved fiercely and deeply. We take comfort in knowing that Sean is now at peace and most definitely surrounded by the head banging tunes of Slayer, Dropkick Murphy and the Barenaked Ladies with his faithful felines, The Royal V and Hope, snuggled forever by his side. Family and friends are invited to join the family at their home to share memories of Sean on Thursday, December 23, 2021 from 11:00 am to 4:00 pm. In lieu of flowers contributions can be made to the Children’s Cancer Association (CCA) in honor of Sean & his younger sister Bonnie who preceded him in death.

Sean Arnold passed away on Saturday, December 18, 2021 at the age of 52 from a sudden heart attack in his home. He is survived by his loving children, Erik & Emma; devoted wife, Tami; parents, Danny & Cindy Arnold; siblings, Becca, James & Geoff;... View Obituary & Service Information

The family of Sean Arnold created this Life Tributes page to make it easy to share your memories.

Send flowers to the Arnold family.