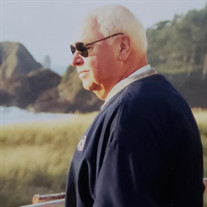 Walter Dennis Hall January 8, 1932-January 4, 2020 Walter Dennis Hall passed away on Saturday, January 4, 2020 surrounded by family. He was 87 years old. Denny, as he was known to most, was born in Cleveland, Ohio on January 8, 1932. As a boy, he and his family lived in Ohio, New York, Washington D.C., West Virginia, Michigan, Pennsylvania, Illinois, and California. After high school, he spent some time at the University of Illinois in the School of Engineering. In 1951, he entered the army for a two year tour of duty. After his tour, he joined his father’s business in Southern California where he met his wife, Patricia Dye. They were married in 1955. By 1960 they had four children, Doug, Cindy, and twins Kirk and Kathy. In 1961 Denny joined Russ Chamberlin in Portland, Oregon. From there Denny built up the RCI brand until 1968. He was offered the position of Vice President of Sales and Service with the manufacturing company, Supermold. He moved his family of six to Lodi, California where they spent the next two years. Denny, loving the Pacific Northwest, knew he wanted to return to Portland to raise his family and start his own company, Automotive Industrial Marketing Corporation (AIMCO). For the next 24 years, he built up the company. Later, he semi-retired and was able to spend more time at their second home in Ocean Reef in Key Largo, Florida. There, he and Pat spent the winters enjoying the Florida Key’s weather and entertaining family and guests on boating and fishing trips. It is what he loved to do. In 1999, Denny officially retired from AIMCO. He kept himself busy over the last 20 years. His boat, the Nepenthe, was often crossing the bar out in search of salmon and tuna. He served on the boards of the Oregon Symphony, Portland Yacht Club, what is now All Classical Portland KQAC, and recently stepped down after 18 years from the Columbia River Maritime Museum. Denny and Pat celebrated their 64th anniversary last summer. Their home in Cannon Beach was where they enjoyed the slower pace of coastal living, classical music, family, and friends. He leaves behind a legacy that will be difficult to follow. He instilled in his family a love of the outdoors, a sense of adventure through travel, and a strong work ethic. Denny is survived by his wife Pat, their children and spouses Doug (Noi) Hall, Cindy (Bruce) Bogard, Kirk (Kim) Hall, and Kathy (Neil) Sinnott; ten grandchildren; and two great grandchildren. A memorial service to celebrate Denny’s life will be held at the Hillside Chapel in Oregon City at 1pm on Saturday, January 18, 2020. In lieu of flowers, the family asks that you donate in his memory to the Oregon Symphony, Columbia River Maritime Museum, or All Portland Classical radio.

The family of Walter Dennis Hall created this Life Tributes page to make it easy to share your memories.

Send flowers to the Hall family.