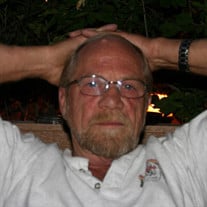 Wes Warner, age 70, of Oregon City, Oregon died Saturday, August 4, 2018 at OHSU Hospital of a massive stroke. Wes was born August 15, 1947 in Eugene, Oregon to Harold E. Warner and Marian A. Feller Warner. He attended Oregon City schools and graduated in 1966 from Oregon City High School. He joined the US Army and within 2 weeks of graduation left for Fort Polk, Louisiana in order to learn underwater demolition, but the army promptly put him in welding school! Due to his high school wrestling career, he was able to wrestle for the Army and was chosen for the All Army wrestling team. However, before those orders could be recognized he received orders to go to Vietnam. In Vietnam, he was assigned to and in charge of an LCM-8 (MIKE BOAT) as well as LARC-V boats, moving supplies, equipment and troops along the South China Sea and the Mekong River. His unit was later assigned to Thailand, where he re-uped for the unit. As Wes liked to say, he re-uped because he liked Thailand but Uncle Sam like his unit so much they were sent back to Vietnam where he served a second tour. He was honorably discharged as an E-5 Sergeant on Valentine’s Day, February 14, 1969. He returned to Oregon City, where he attended Clackamas Community College, thinking he wanted to be an architect, and met his future wife, Rebecca Lovell, from Colton, Oregon. They were married November 21, 1970 in Colton, and made their first home in Oregon City. Wes later realized sitting at a desk was not for him and decided to follow in his Grandfather and Father’s footsteps and become a contractor. A son was born in 1976 and a daughter in 1978. Loving the East side of the state, Wes and Becki packed up their small children, David and Teresa, and moved to Medical Springs, near Baker City in 1980, where they spent the next 10 years on a small ranch. In 1990, work brought the family back to the Oregon City area. By this time, Wes had a thriving business as a commercial contractor, building gas stations and convenience stores. Wes discovered an interest in Classic Cars and Hot Rods. He eventually came to own 3 hotrods and was a member of Trick N’ Racy Car Club in Oregon City and Route 26 Cruisers in Sandy. Wes was also a long time member of the Oregon City Elks Club, having joined in the early 70’s. Wes is survived by his wife of 47 ½ years, Becki. His son, David Wesley and wife Shawna of Lebanon; daughter Teresa Marie Grell and husband Dustin of McMinnville; Grandchildren Jefferson, Shayna, Hailey, Amos, Avery, and Great Grand-daughter Inara. Brother Michael Warner and wife Alysia; Sister Kathy Storment and husband Dennis; Nephews Nicholas and Matthew and Niece Stacy. He is predeceased by his Parents and Brother Gerald.

The family of Wes H Warner created this Life Tributes page to make it easy to share your memories.

Send flowers to the Warner family.